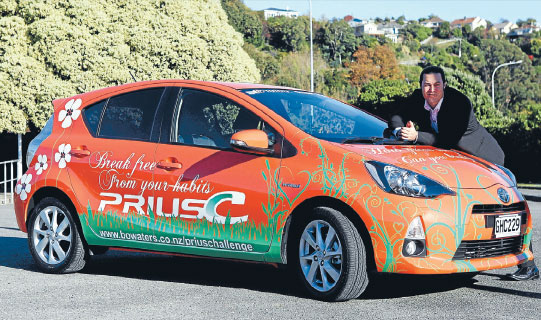 Photo: MARTIN DE RUYTER/FAIRFAX NZ: David Eagle of the Bowater Motor Group drives a 2012 Toyota Prius Hybrid car that is being used in the Prius Challenge in Nelson and Motueka.
Article from The Nelson Mail 06/06/12.

Here's a tip for fuel efficiency: don't chat so much while driving that you miss your turn.

This week the challenge course is in Motueka and next month it will be back in Nelson for a corporate challenge for companies to vie to be the greenest business.

Nelson eco-builder Nick Marer, from the Little Pig Building Company, won the Nelson challenge, topping 50 other drivers with his eco-score of 2.5 litres per 100km fuel economy over the 7.5km course which takes in the hill up and over Russell St, the highway along Queen Elizabeth Drive and back through town.

"He concentrated and paid attention to what he was doing."

Clearly, Mr Marer does not chat so much but he did have the advantage of already owning an older Prius.

The idea of the challenge is about having a conversation about hybrid cars and fuel efficiency.

Mr Eagle said there were still misconceptions about hybrid cars here but in Europe they made up 18 per cent of new car sales, and hybrid technology had an important part to play in manufacturers bringing out new models.

"Part of the conversation needs to be about not reducing the number of cars but changing the kind of cars and the kind of fuels."

The new $34,990 Toyota Prius C gives the driver feedback on how fuel efficient their driving is through graphics on the dash.

Mr Eagle said Mr Marer did well by planning ahead. "Coming up to the intersection he was looking well ahead to see whether he should speed up or slow down."

The challenge was about changing old habits, he said.